My Extremely Extensive and Intensive Review of New Moon


Grade: B- (this was graded on the hotness curve)
Posted by Many Manifestos at 10:07 PM 0 comments

Religion has always been a fascinating subject for me. People are often to too wrapped up in the controversies of religion and forget to step back from it. We forget that we can treat it as an object that is meant for observation, rather than something that envelopes our lives.

I often find that there are two major groups of people in this world: 1) people who are very religious, and 2) people who despise religion. There is a smaller group of people who consider themselves agnostic and an even smaller number of people are stuck in the middle of all three due to pure curiosity. I have found myself wandering in this smaller group.

I have decided that now is the best time to embark on a little project I’ve been thinking about for the past couple of years. I have built a very diverse network of friends, so I believe that this will work. I’ve decided that over the next couple of weeks, I would like to attend a service at all of the following, in no particular order:

This will mainly be an observational study from the perspective of someone who has faced her mortality.

I realize some of these places might have exclusion rules that might create barriers for me. This is where you guys come in. If you belong to one of these establishments, and you feel you can get me in, so to speak, I would love to attend a service with you. I would like to complete this project within before the middle of February, so we have lots of time. Please just leave a comment here with your name and I will get back to you.
Posted by Many Manifestos at 12:20 AM 1 comments

A Postcard from My Head Hair to My Leg Hair 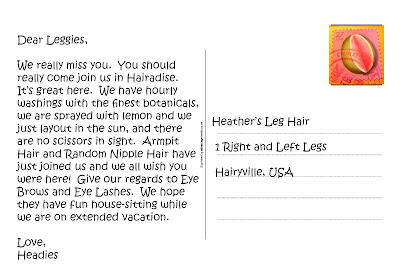 (Click for Bigger)
Posted by Many Manifestos at 7:31 PM 1 comments