Josh and I were watching a particularly violent scene from A History of Violence; a part where the henchman basically walk into Viggo Mortensen's fists.


Yes, I quote myself often.
Posted by Many Manifestos at 10:13 PM 0 comments

This one is courtesy of Steve:

"I sat down in front of my computer last night to look at one of my favorite websites. As I unzipped my pants, my car alarm started going off like crazy. My keychain panic button in my pants pocket had hit the armrest. My activity was ruined."

This one is courtesy of one of my customers at work:

"You should only use shirts made in the USA, especially with what is going on today."

Yes, one country attacks us, and we should isolate ourselves from all of them.

And with that in mind, Moussaoui Jury Told to Avoid Dictionaries. Why you ask? Cause one juror had to look up the meaning of the word "aggravating." So sad.
Posted by Many Manifestos at 1:28 PM 0 comments 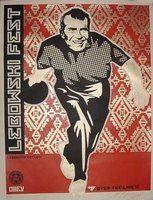 Many people say that baseball is the all-American sport. It's "as American as apple pie." In actuality, both apple pie and baseball have ties to Europe. Baseball is just a water-downed version of cricket. Apple pie originated in the Netherlands. There are several Dutch paintings that predate the discovery of America that depict people are serving apple pie.

Even though it is said that bowling originated in Egypt and was reborn in Germany, it has been adopted and molded to the American standard. It is a sport you can only play indoors, most likely under flickering halogen lights that illuminate a sea of plywood and vinyl. Unlike baseball and football, everyday is a good day to bowl. Bowling is synonymous with fries, cigarettes, and beerguts. A 65-year-old diabetic overweight man could be a God in the sport of bowling. It requires little physical exertion, some concentration, and a good amount of hand-eye coordination.

I used to bowl a lot when I was young. My grandmother lived with us during the week, and in the summers she would often take us to the bowling alley down the street. I was also taking piano lessons at around the same age. This not only helped my hand-eye coordination, but also gave me another reasons to keep my nails short.

Now I grow my nails out and my wrist has lost a lot of strength. I can still throw the ball straight down the lane, but not as consistently as once before. I used to be able to play every single frame with my ball hitting the center pin. Nowadays, maybe 50 percent of my rolls touch the center.

Despite my recent shortcomings, I am still able to enjoy myself, if only for the food and conversation. I think that the fries at Bowl America are perhaps the best in the world. The perpetual noise and hoopla of the alley always give topics for conversation.

And sometimes, it's just nice to high-five the fat hand of 350-lb Wilford Brimley lookalike as he jiggles with joy over rolling a perfect game.
Posted by Many Manifestos at 11:20 PM 0 comments

Perverts are so freaking funny.

Chris Hansen:""It appears from this transcript that you are open to having sex with this girl."

The best part is that guy sounds almost just like Gary Busey.
Posted by Many Manifestos at 6:36 PM 0 comments

These are just some thoughts/observations that I've jotted down:

Saying a movie is automatically good because Johnny Depp is in it is like saying a turd must taste like thanksgiving dinner because there is a corn nugget in it.

Brad: Name the three great American works of fiction.
Me: What about the Constitution? That's a great work of fiction.

This song sounds like updog.
Posted by Many Manifestos at 3:18 PM 0 comments

After all my internet browsing and partaking, I have finally landed on blogger. I didn't care for some other blog hosts. Didn't care for motime. Livejournal was aimed at self-absorbed people. I even tried a Yahoo! 360 blog, but it is still in beta version, meaning that the options are extremely limited. You can't post more than one picture per entry, which is extremely limiting. So here I am. Let's see where this takes us.
Posted by Many Manifestos at 10:42 PM 0 comments